Locally, the fishing in Port Phillip Bay has been improving by the day as we see the water temperatures slowly begin to rise. Inclement weather with record rains and gusty winds has limited windows for local anglers. However, those keen and prepared to get wet certainly have crossed paths with some cracking fish. Land based locations such as Mordialloc and Mornington pier as well as Mt. Martha Rocks have been particularly popular in this poorer weather for those targeting snapper. With numerous fish up to 3 kg being encountered in both locations. Brett Reed and Zac Carpenter from ‘Reedy’s Rigs’ recently fished Mornigton Pier this week and scored some cracking table fish up to 3kg. Brett noted the “Reedy Rigs 187 Suicide Hooks’ to be of great use in pinning these Snapper in the dirty water. With strong south-westerly winds forecast for the rest of the working week, those keen to wet a line will find snapper have moved into shallower, reefy areas to actively feed in the stirred-up water.

When the weather has permitted those fishing deep off Frankston and Mornington have seen some cracking snapper up to 7kg. Anywhere from 18-20m has been popular with many anglers finding the 19m line to be a good place to start sounding fish. Good customer and friend of the shop, Terry Watkins, has had no problems finding his fair share of snapper along the 19m line with fish up to 6kg being caught. Here, fresh bait has been pivotal with calamari and silver whiting being particularly popular. As well as Snapper, the Salmon fishing off local reefs such as Black Rock and Ricketts Point has seen some excellent action. Staff member Max fished the dirty water line along Ricketts Point early last week and found a large school of Salmon actively chasing schools of Garfish. Max found soft plastics in a four-inch size quickly ripped over the surface to imitate a fleeing garfish most effective. This made for some very exciting surface fishing with some of the salmon landed up to 60cms. 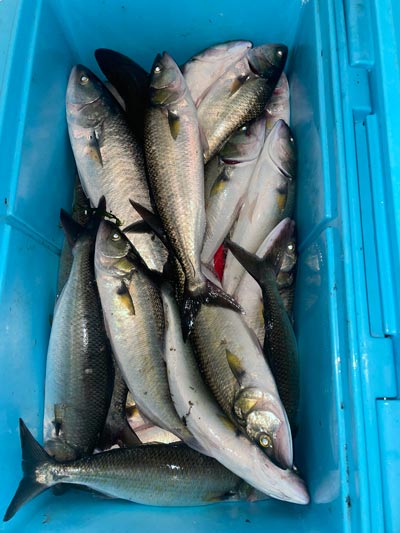 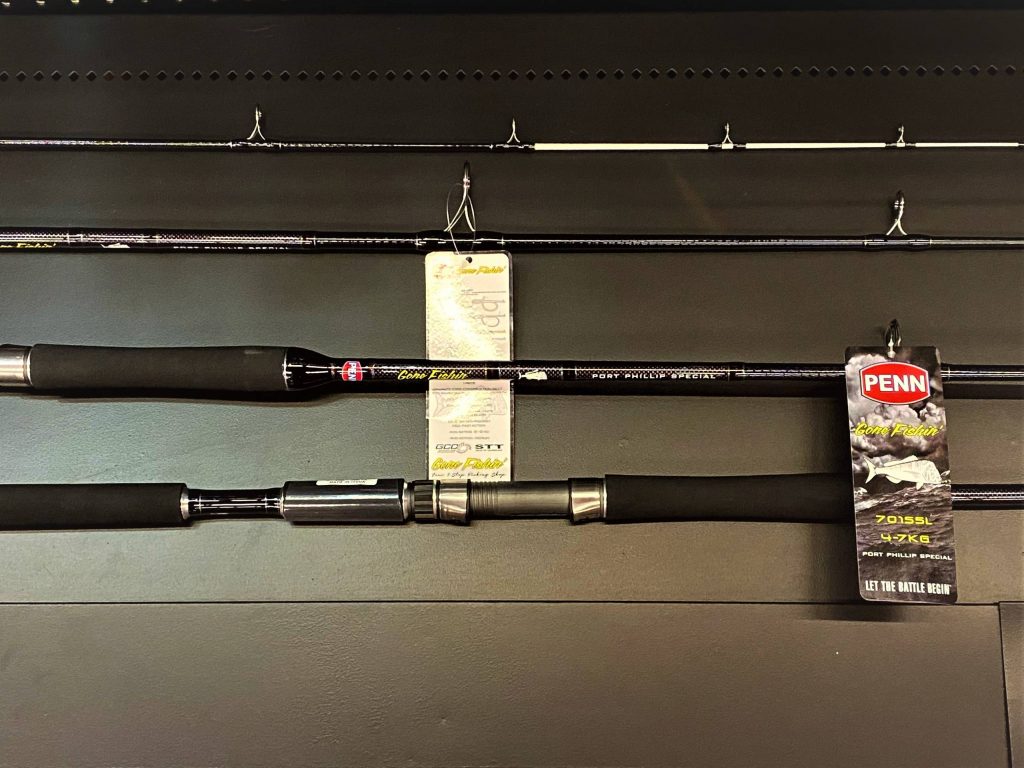 If you’re fishing for snapper, check out our Gone Fishin Snapper rod on special 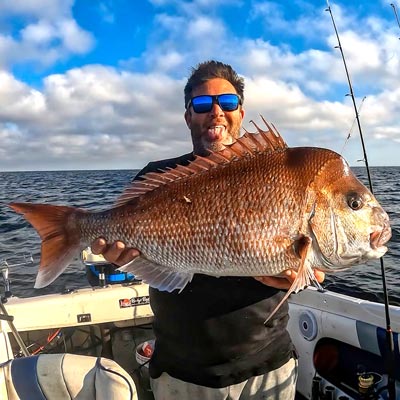 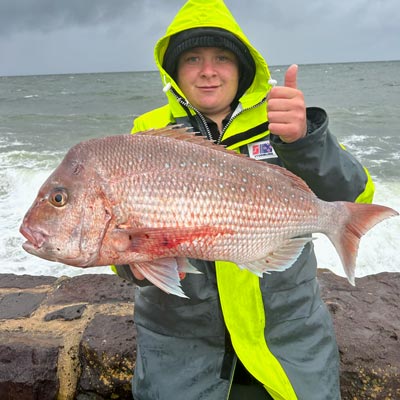 Despite the recent foul weather, this time of the year is a great time to venture across to our very own Westernport Bay. The big calamari can be found in large numbers spawning on shallow weed beds, the Snapper begin to well and truly enter the port to feed up before spawning and the whiting fishing even begins to go from strength to strength (particularly this season). Don’t let this dirty water fool you, there are a host of species available at the moment. Good friend of the shop Mark Ross encountered some great Snapper just out from Hastings last week. Fishing in 16m of water out of Lysaughts channel, Mark patiently sat there solo for 3 hours before turning a reel. In the space of 10 minutes Mark had boated 3 Snapper ranging from 4kg to 6kg. It goes to show patience is pivotal at this time of the year and when rod buckles keep an eye out on the others! Team Gone Fishin’s very own Axel Jensen ventured out of Euringa over the weekend and scored a very healthy mixed bag including 2 Snapper at 6kg’s as well as a dozen whiting up to 44cms. Axel found pilchards were the best bait for the snapper, while fresh calamari was too hard for the whiting to pass up on. With a very promising weekend ahead in terms of weather, be prepared to hit the water running! Come see the team for some advice, bait, gear and anything else you may need to help you have a cracking weekend on the water!

Whilst staff members Lachlan and Max have been stuck in this cold weather at the shop for the last two weeks, Store Owner Danny Kardos and son Tyler, ventured up to the Cooktown sunshine and were fortunate enough to fish out of premiere game boat ‘Zulu” for the week. The boys had a cracking trip in near perfect weather, landing everything from Coral Trout to Giant Trevally and Marlin. Highlights of the trip included Tyler landing A 900lb Black Marlin and a 34kg Yellowfin Tuna! Whilst Danny caught Coral Trout to 8kg and Giant Trevally to 25kg all on poppers and stickbaits! 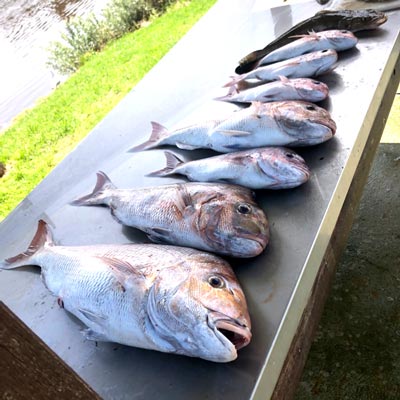 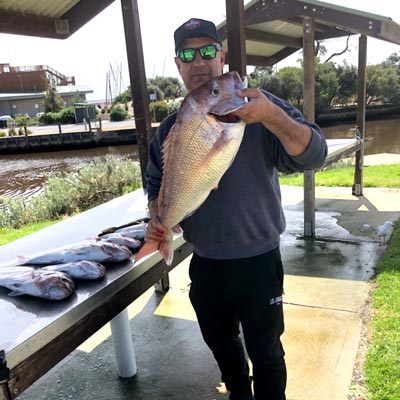 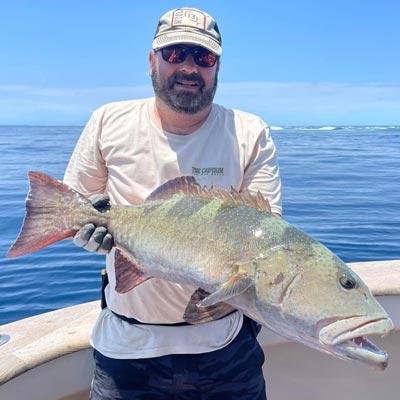 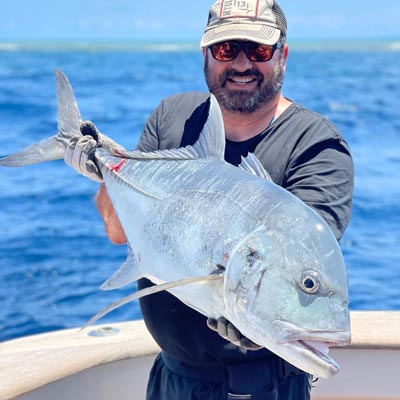 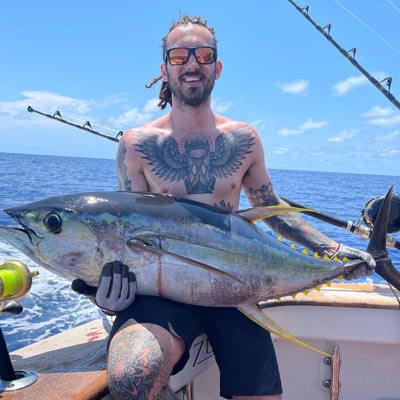 Our weekly reports are back! Send through your photos of your captures through to our Facebook page and we’ll include you in our weekly report. Tight lines